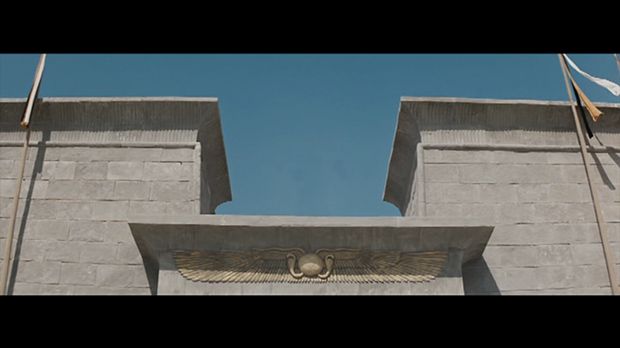 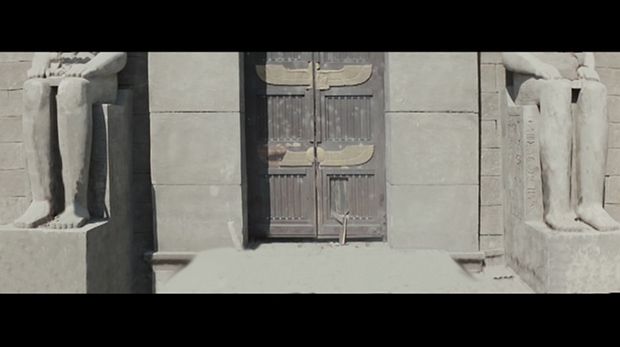 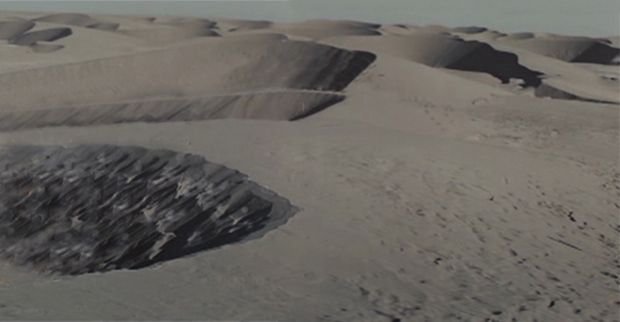 A Pharaoh By Any Other Nameā¦ C. Eamon

C.T. Jasperās latest video installation entitled Sunset of the Pharaohs encapsulates in many respects much of his work to date by bringing together both his practice of creative appropriation and a concern with current socio-political issues. Using a method of digital erasure, a meticulous and painstaking process through which the human figure is removed from a source film, Jasper breathes new life into a popular Polish film of the 1960s. While Jerzy Kawalerowiczās 1966 film Faraon (Pharaoh) provides the material basis for Jasperās new work, in the context of the Arab Spring and its inconclusive aftermath, the filmās structure and narrative become particularly topical. Even as the far-reaching socio-political effects have been felt across the globe, the process of revolution in the Middle East is ongoing. Jasperās Sunset of the Pharaohs provides, then, a timely, critical context for the processes of reading, writing and rewriting history in a mediated culture.

As both inspiration and source of Jasperās work, Kawalerowiczās film outlines the fall of Egyptās New Kingdom under Ramses XI, which in the 11th century B.C.E ended thousands of years of Egyptian power and the glorious monument-building culture for which it is known today. The storyline of the film, adapted from a late 19th Century novel by BolesÅaw Prus has been a vessel for numerous political and historical commentaries since it was written. The demise of the Polish-Lithuanian Commonwealth a century earlier (1795) may have been present in Prusās mind when he turned to writing this, his first historical novel, in 1894. It is highly likely that his Pharaoh is an allegorical work about break up of the contested Polish-Lithuanian union, but this ancient Pharaohās story does not end there.

Just over seventy years later, Kawalerowiczās film becomes, in essence, a veil for his own thinking about specific, contemporaneous political and social realities under socialist rule in Poland. Ideas of hubris, power and the abuses of power are all exposed under the cover of Ramses XIās historical narrative and his bureaucratic-aristocratic regime. Once again the literary figure, allegory, is reconfigured for the conveyance of legible ideas through film for Kawalerowiczās audiences.

Allegory has long been a powerful tool in the writerās arsenal. Thereās power in the pen, and allegory has historically helped shield authors from dangerous exposure. One need only imagine the results more overt communications may have had under similar totalitarian conditions. Filmmakers wield the power of allegory as well and itās no secret that innovative filmmakers under Soviet and socialist regimes in Central Europe developed veiled critiques of power structures, if not the very powers wielded over them. Great examples of this approach can be named from all over the world, but two of the most remarkable arrived specifically in the 1960s during film renaissances in both Poland and Czechoslovakia. Both were hotbeds of revolutionary approaches to filmmaking and two of the most widely known directors, Andrzej Wajda (PL) and Vera ChytilovĆ” (CZ) serve as perhaps now-hackneyed examples of the creative use of allegory. Still, they managed to make many films that at times crossed the line with more obvious political commentary.

With regard to political allegory, Jasperās video is not unmotivated and neither are his choices for its presentation. The wooden structure he designed for the videoās presentation is dynamically architectural. It extends like an accordion upward and outward from the plane of the screen onto which his āPharaohā is projected. And, accordingly, it feels as though it could just as easily be collapsed as extended, though its form is, in reality, a solid construction. This architectural illusion of diagonal motion reinforces not only the mobility suggested by its cladding of tanned sheepskin, recalling, perhaps, a nomadic lifestyle, it is also highly suggestive of a photographic cameraās bellowsāa collapsing, pleated mechanism that sometimes connects a large camera body with its lens pulled far out in front of it on many large-format cameras. The collapsible bellows is not a feature of archaic convenience. It is still used in photography for a very specific reason: to correct for the distortion created by the curvature of the lens, and it is especially important to photographers specializing in architectural photography. The bellows allows the lens to be moved and displaced with respect to the focal planeāthe area where the image converges on the photographic film surface within the body of the camera. It makes it possible for the lens to be adjusted even angled differently with respect to the cameraās focal plane. This in turn allows for the correction of, for instance, converging vertical elements like columns in a grand architectural space, or tall arches, which are then made to appear parallel in the final photograph through this mechanism. The curvature of the lens in the human eye poses a similar problem for objective observation, but this is presumably compensated for (in biological terms) by the circuitry of the brain. As for Jasperās video installation, objectivity is a key element of disputation. The lens and aperture of the camera in film theory and history has long been linked to the human eye, which also takes in images of the outside world in the form of light waves. Moreover, the space of the cinema or film theatre is itself very often considered a psychological spaceāan inner space of both real and psychological projections. These themes are also operative in Jasperās constructed theater space. It is a compelling idea, that a cinema space constructed like a bellows might show a film that is in itself a form of correction.

CT Jasperās Sunset of the Pharaohās derives its content from the many layers of interpretation that precede it, still laden within its literary and now, visual, history. His technique, the digital removal of the human presence portends another history, one that is yet to be completed. For as the emptied vessel that is Kawalerowiczās Pharaoh on the fall of the New Kingdom provides a new framework for Jasperās video, his new one is in process of being filled.

Project cofinanced by the Ministry of Culture and National Heritage of the Republic of Poland.