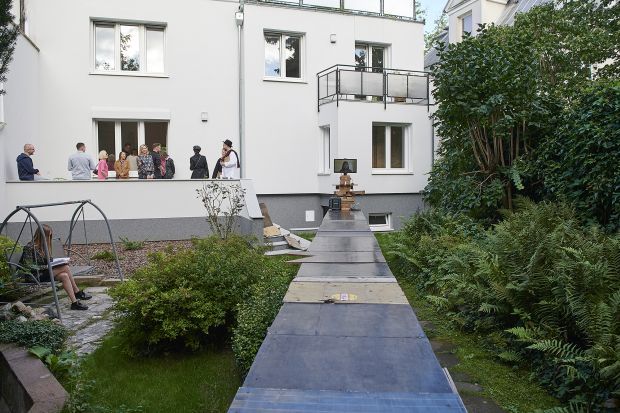 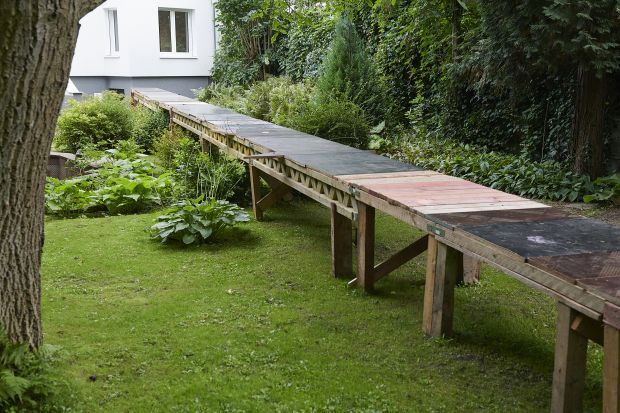 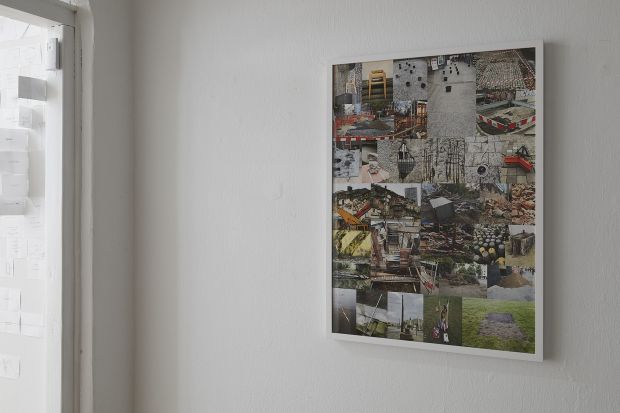 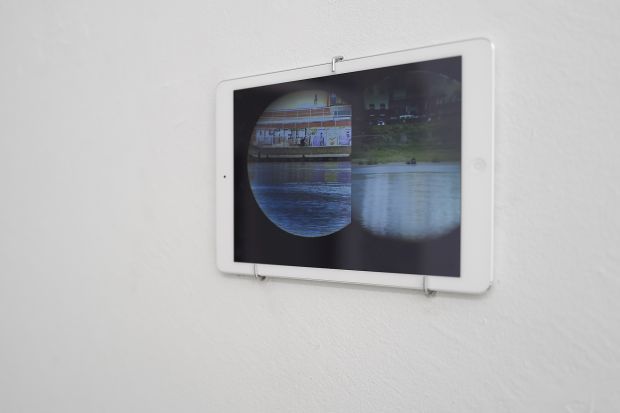 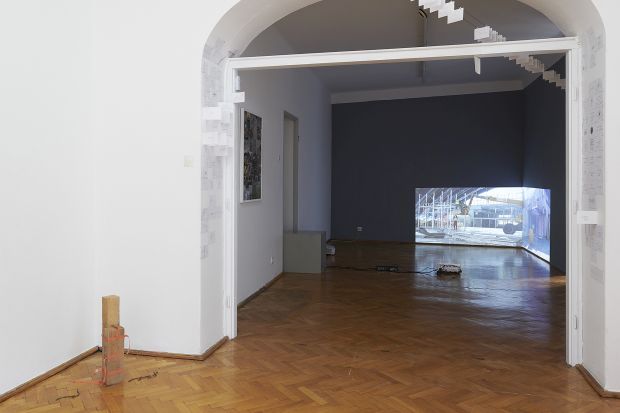 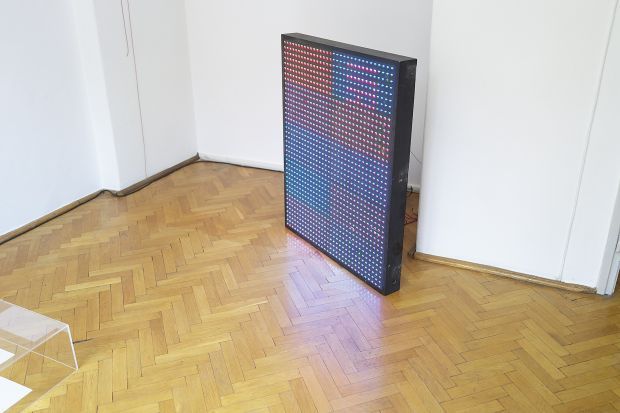 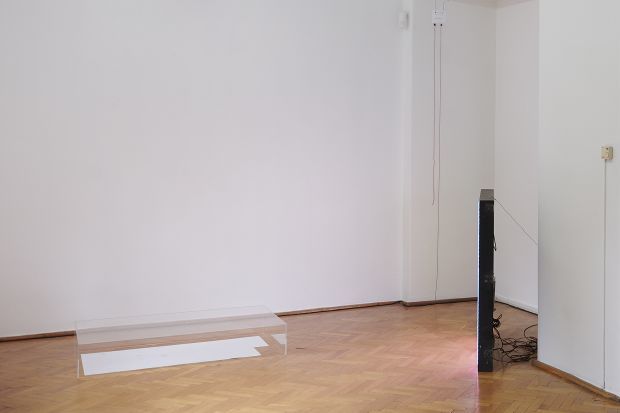 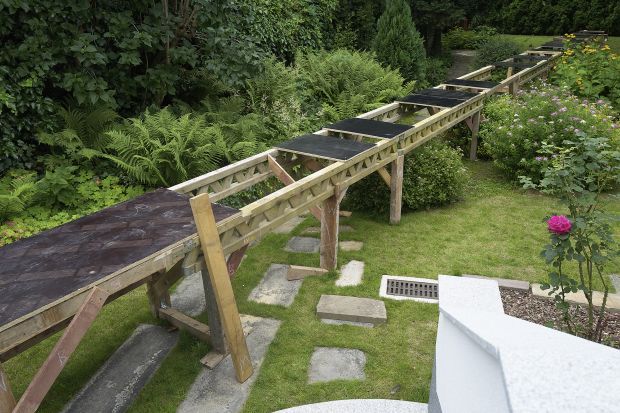 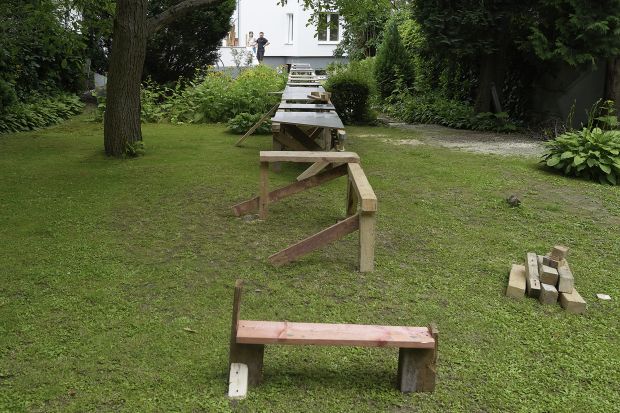 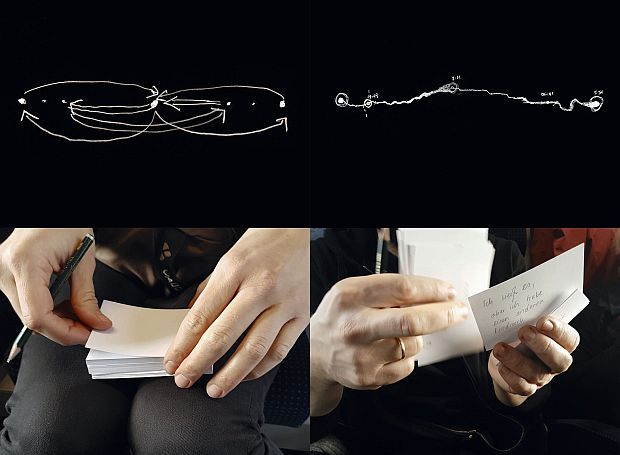 The exhibition “de-re-konstrukt” summarises close to two years of collaboration between the artists Simone Rueß and Krzysztof Franaszek focusing on urban and social transition in the capital cities of the neighbouring countries. Friends for many years, the artists engage in art practice elaborating on the complex relationship between Warsaw and Berlin. Faced with the unexpected developments unleashed by the pandemic, their cross-border project has taken on new meanings and dimensions while the concept and execution of the exhibition has been changing and evolving. The gradual expansion of the site-specific exhibition in the gallery space will span the period from late June to late September, bringing together a host of media including videos, photographs, drawings, and installations.

“de-re-konstrukt” comes as a natural continuation and elaboration of the artists’ collaboration dating back to 2011, when they jointly created the video installation “HALA“. It documented the dismantling of the KDT market hall which spanned a vast expanse at the very heart of Warsaw next to the Palace of Culture and Science from 1999 to 2009, which today marks the construction site of the contemporary art museum MSN. In their record of gradual destruction, the artists discovered that the demolishment involved the erection of temporary structures which were later taken down, as well. “de-re-konstrukt” follows the arc of creation and destruction, which is part and parcel of the urban lifecycle.

Rueß and Franaszek investigate processes of construction, deconstruction, and reconstruction. They have been exchanging by email photographs which capture the transition of both Berlin and Warsaw. Placed in the context of distance separating the artists’ home cities, their mutual communication and exchange inspires and informs the “de-re-construct” project. Rueß and Franaszek have classified more than 400 photos into thematic strands which underlie an ever-expending network of relations, including: line; border; construction; deconstruction; communication; loops; positive; negative.

A key part of Rueß and Franaszek’s shared practice is when they engage in actions which inspire them through unique moments of encounter and dialogue. During a six-hour-long meeting on the Warsaw-Berlin train, the artists changed trains several times, travelling back and forth, stopping every now and then between their respective points of departure. Whenever Simone or Krzysztof became disorientated, they would draw a new line and record their experience in the two languages. Another action took place on the Polish-German border crossing at Frankfurt/Słubice when the border was locked due to the pandemic. Unable to cross and bridge and meet, the artists found alternative routes of communication. Objects and traces remaining after those actions are on view at the exhibition.

As long as the exhibition remains open, the audience can follow, both at the gallery and online, an on-going exchange on “de-re-construction.” A walk-in installation in the gallery garden is rising as a monumental structure put together with second-hand segments found in Warsaw and Berlin. This 3D collage, a symbol of crossing borders, measuring physical distance, and coming into contact, establishes an axis across the open space of the garden. Visitors can discover and test an emerging line of communication between two points in space. The symbolic platform levels the natural layout of the garden and escapes the confines of the immediate environment, ready for new encounters. At a time of isolation and fear it fosters, the structure calls for contacts, closeness, open dialogue, both individual and social or political.

The exhibition is supported by Goethe Institut Warschau