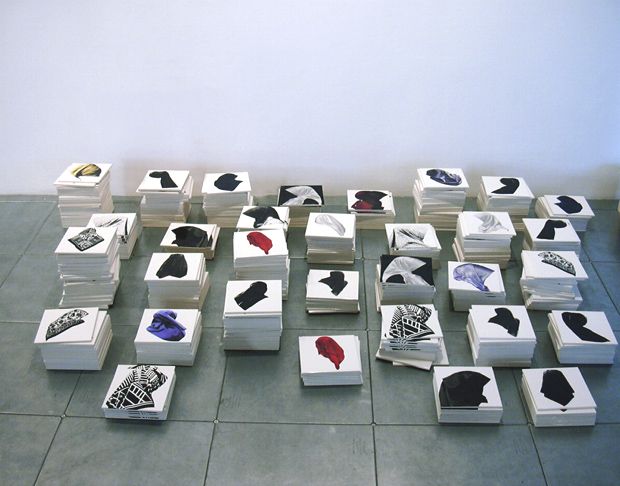 Fanshon II is the continuation of Marta Deskur's project which she realised in 2003 during her residency at Künstlerhaus Bethanien in Berlin. The theme of the project was Muslim head kerchiefs but the artist kept a clear distance from the religious symbolism of head kerchiefs in the Islamic tradition. Living in the Kreuzberg district, in a Turkish area, she observed and filmed women wearing head kerchiefs or, rather, the way the head kerchiefs were worn and their exceptional diversity. The head kerchiefs of Muslim women are usually perceived as a traditional head covering, a kind of a veil protecting against strangers' looks; however, in Marta Deskur's work they reveal their extraordinary richness. Multi-coloured, ornamented or plain, tied or draped in various ways, they turn out to be subject to the influences of contemporary fashion.

​Resisting the temptation to make her theme exotic, far from the stereotype of the fascination with the Orient, Marta Deskur looks at the head kerchiefs as at a piece of clothing, a mode of signalling one's belonging and, also, one's individuality.

​In the project realised for Le Guern Gallery, the photographed and closed-up frames featuring head kerchiefs have been burnt into ceramic tiles. Among them, the artist has placed tiles with another head covering – a representation of a nun's veil. She returns to the topic she under took before in her film from 1999 entitled "Welon to moje włosy" (The Veil is my Hair). Juxtaposing them with Muslim head kerchiefs, the artist avoids making any generalisations about the clash of cultures or traditions. Sequences of film frames show a mundane, every-day activity of placing and shaping the veil on the head. This is similar to the scenes registered in the streets of Berlin's Kreuzberg with women during their regular, every-day rituals of walking, doing shopping, slow or hasty talks, meetings, and gestures. ​The Muslim head kerchief and a nun's veil are visual motifs which, in Marta Deskur's interpretation, flicker with different hues of significance, more nuance-saturated than easy simplifications about cultural relations between the East and the West.