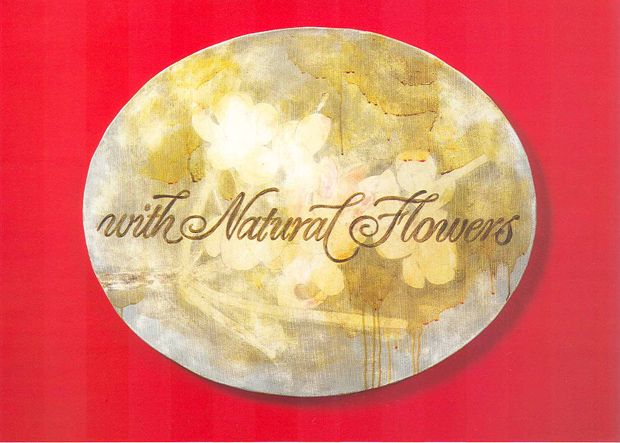 Against the title itself, which comes from one of the artist's paintings, the exhibition "With Natural Flowers" does not feature anything inspired by nature. On the contrary, artificial flowers in the paintings come from the fairy-tale-like sets of bedtime stories for children. Painted after photographs or postcards which earlier repeated frames from films, they record the transformations of subsequent media carriers. In the painterly translation these media effects change into the sophisticated aesthetics of defect. What was only a background in the fairy-tale settings, becomes the foreground issue in the artist's paintings: a blooming tree in a deserted landscape, a vase with flowers in the window of an empty room. The artificial naturalness of film props acquires the entirely natural artifice of painterly motifs. The non-obvious character of Maciejuk's seemingly simple representations comes from his way-ward transformations in which familiar images of pop-culture are reproduced according to the principles of painterly tradition. Executed in a pointillist technique, using pale hues, as if faded by time, they are embraced in an tondo or oval shapes. As in the "American Night" exhibition, still shown at the Warsaw's Zachęta Gallery, the things in this project are not always as they seem to be.