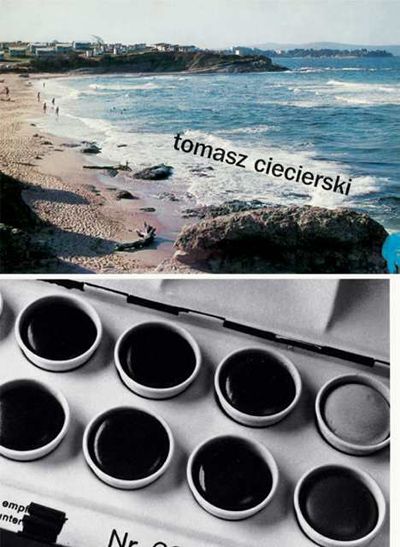 The exhibition presents the latest works by Tomasz Ciecierski, a painter who from the beginning of the 1970s has disputed the rhetoric of painterly myologisation. He is an artist who, playing on the ambiguities of painting and its tradition, has combined analytic distance with the search for subsequent threads that updated the painterly discourse in his changing painted series.

The "Unphotographed Paintings" waywardly refer to the long years of interrelation between painting and photography in Ciecierski's practice, along with his use of photography and its union

with drawings in his earlier works and the reversal of this in recent one, when his paintings have more and more often been the subject of photographic records. In his monumental series, which the artist started two years ago, he shows images made from hundreds, thousands even, of photographs, thus documenting his painterly workshop. His latest grand composition, comprising c. 600 photographs of variously shot paintings, is the record of the artist's changing point of view and his perception of his own work.

The series of photocopied juxtapositions of photographs, shown for the first time here, reveals his visual passions, shots of reality registered over the years and self-imposing associations. The selection of a dozen works is only a fragment of the collection of episodic, although not coincidental, representations in which the theme of painting and painters constantly returns, along with the views from museum and atelier windows, streets named after painters, copiers, portraitists, palettes, advertisements of paints. What returns most often, however, is the question of visual experience and the possibility of its translation and the related traps which the painter very often treats with a lightness typical of him, almost jokingly, tongue in cheek, yielding to visual associations.