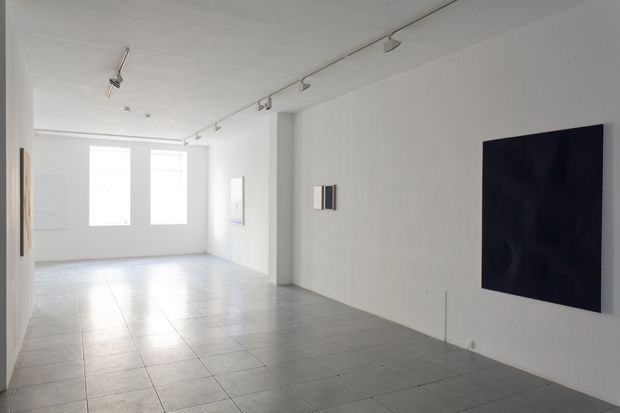 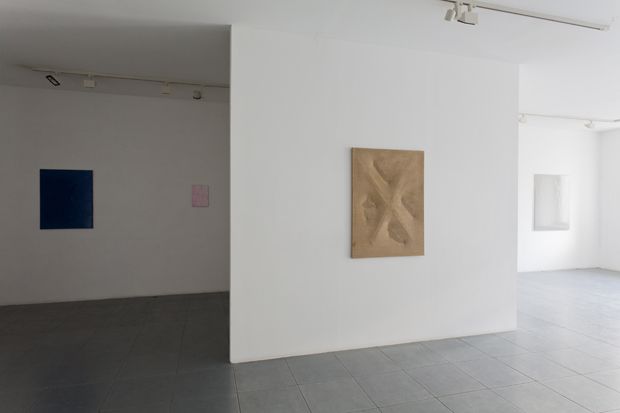 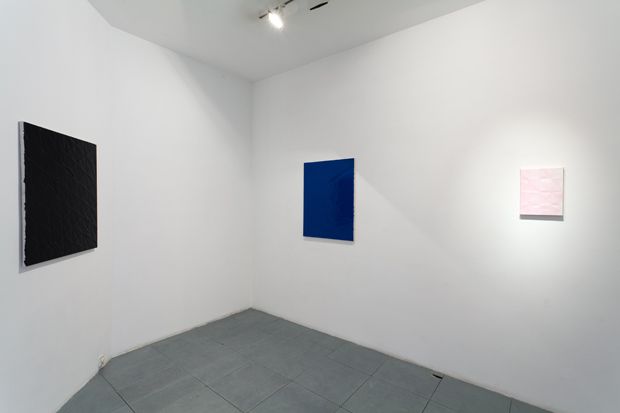 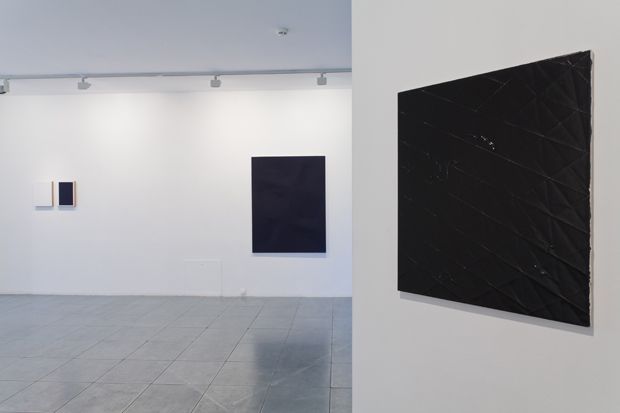 An overexposed polaroid print? Image-reflecting emulsions, sculptures made of strips of wood, covered with canvas? Tomek Baran’s painting practice situates itself in flirtation with photography and in dialogue with sculpture. Though ‘in flirtation’, his paintings are free of personal expression, emotions, or what is commonly referred to as a theme. Rather laconic, they reflect an orientation towards formal investigation. Using the painting’s three basic elements, each of the artist’s works is an attempt to reinvent painting. The stretcher/frame, in some works nailed together slantwise or crosswise, becomes visible also from the front: we can see the ‘skeleton’ of the painting as if in X-ray. The canvas itself is stretched backwards, or arranged into a geometric pattern. It may be covered by industrial paint, which has coagulated into a mirror-like surface, by pearl paint, or by trace quantities of glue, rubbed directly into raw canvas. The show features ten works created in the years 2011-2012.

There is visible movement between surface and depth in Baran’s art. Rendered with glossy alkyd paints, the quicksilver paintings reflect the world (rather than recording it like photography does). Composed into a white, painted ‘frame’, they move towards the centre of the picture as if they were escaping from the canvas. Their surface, at first sight seemingly smooth, upon closer examination reveals protuberances and swellings. In a series of pieces with the canvas stretched backwards, the artist introduces a suggestion of reverse movement, of the painting’s being sucked in or devoured by the wall. Sunrays glimmer in the pearly works, where the paint absorbs light, and disappear completely in the dense ‘near-black holes’.

The selection presented in the artist’s first Warsaw solo show at Le Guern reflects but one of the strands of his practice. Parallel to the trend on display here, Baran creates also series of works featuring the motif of colour and black-and-white strips, painted in gradient fashion on paper and canvas. Another motif they employ is that of several (three – four) break lines resembling a shattered mirror sheet. Luminous in feeling, they correspond with a series of colour strips painted on plexiglas that, suspended at a right angle to the wall and illuminated from the side, ‘paint’ the gallery space with light.

Tomek Baran was born in 1985. He graduated with an MA in painting from the Cracow Academy of Fine Arts. His works have been shown in the following exhibitions: Best Graduation Projects, ASP Gdańsk (2010), Eugeniusz Geppert Competition, BWA Wrocław, where he won a honorary mention awarded by Art&Business magazine (2011), and the 40th Painting Biennale – Bielsko Autumn, BWA Bielsko Biała (2011). He has shown his solo projects at F.A.I.T. Gallery in Cracow (2009), Delikatesy Gallery in Cracow (2010), and AS Gallery in Cracow (2011). This year he has had two solo shows, Light/sensitive at Bunkier Sztuki in Cracow and Inspiration at MD_S Gallery in Wrocław. His exhibition at Knoll Gallery in Vienna opens in November 2012. Baran is the only Polish winner of the Strabag Artaward International in Vienna, where he will be artist-in-residence and where his solo show will open on 31 January 2013.